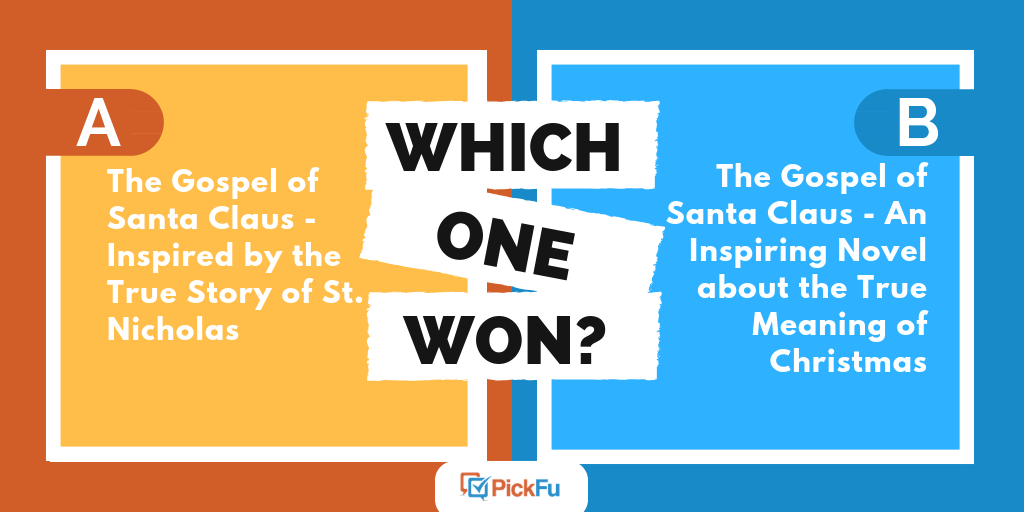 Some Christians grow up believing in Santa Claus, but many don’t. For Christians, Christmas tends to focus on Jesus instead of Santa. But what if the two were not mutually exclusive? After writing a book about Santa Claus and Christianity, one author tested his book title on PickFu. The author chose a target audience of self-identified Christians. What better crowd to judge?

Let’s find out why this targeted audience preferred the shortest title.

Truth is better than fiction

In a book about the real person behind Santa Claus — already a highly fictionalized character — a Christian-based audience does not want to see fiction in the title.

One male respondent said, “I like the first option the best because it tells the story of St. Nick and tries to keep it close to the facts as possible. The other goes into a little fiction.”

In Option A, the title simply states that the book is “inspired by St. Nicholas.” It sounds the most like an autobiography of Saint Nick, rather than the novel Option B’s title makes it out to be.

Because St. Nicholas lived such a long time ago, any book about his life is bound to be aided with fiction. But if you want to sell it to a Christian audience, make it sound as authoritative as possible.

Even though Options B and C provide more detail in their titles, readers preferred Option A’s brevity.

One responder said, “Option A describes the book well with fewer words so the title can be quickly read and understood. The other two are longer and require more thought.”

If a title forces bookstore-goers to stop and try to figure out exactly what it’s about, it’ll probably lose their interest, too.

The key is not just a short title, but a short title that delivers important information. By saying it’s about the gospel of Santa Claus according to the true story of Saint Nick, Option A gets right to the point.

Options B and C, on the other hand, try to add information that ends up distracting from the main point of the book. And one respondent described the two losing options as “corny.”

If you need help deciding which book title will appeal to your target audience, create your own PickFu poll to find out!