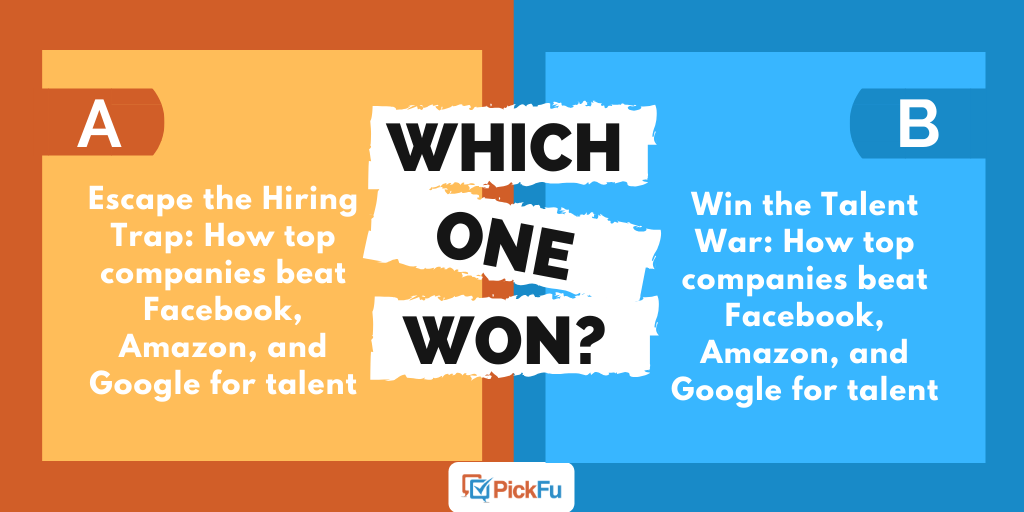 Even the tiniest changes in business book titles title can affect whether a reader buys your book.

One author recently tested two versions of a book title with PickFu. The author polled 50 college-educated respondents and asked, “I’m writing a book on how to attract and hire great people. What title do you like the best?”

And the winner is…Option B! With a score of 74 to Option A’s 26, Option B’s title was a clear winner.

The biggest difference between the two business book titles is that Option A talks about “escaping” a trap, while Option B instead focuses on “winning” a war.

Several other respondents agreed, adding that the positivity in Option B attracted them to that title, whereas Option A made them feel like running in the other direction.

If you’re writing a book to help people hire awesome, college-educated talent, you don’t want those readers to turn and run.

The point of view of business book titles is important

A lot of respondents felt confused about “the hiring trap” referenced in A. What, exactly, is a hiring trap? They said the title sounds like the book is for would-be hires, not would-be employers.

One respondent said that “Option B’s title makes it more clear that it’s from the point of view of the one doing the hiring, versus the person looking for the job.”

Another respondent voted for Option B because it’s clearer than Option A, but mentioned that Option B still doesn’t make it crystal clear who the intended readership is.

She said, “I will admit I would need more subtext on the front cover to understand that this is for attracting and hiring people as opposed to a guide for people trying to be hired.”

The author of the book should take note and tweak the subtitle to make the book’s intent clearer.

Positivity wins the game. No one wants to escape, but everyone wants to win. Keep the language positive and you’ll see your readership grow.

Also, make sure that your audience is super clear. Especially in a book about hiring people — not about being hired, which is arguably a more common problem — make sure the hiring staff know the book’s for them.

Are you debating between a couple titles for your own book? Take them to PickFu, where you can create your own poll to find out which title readers like most and why.