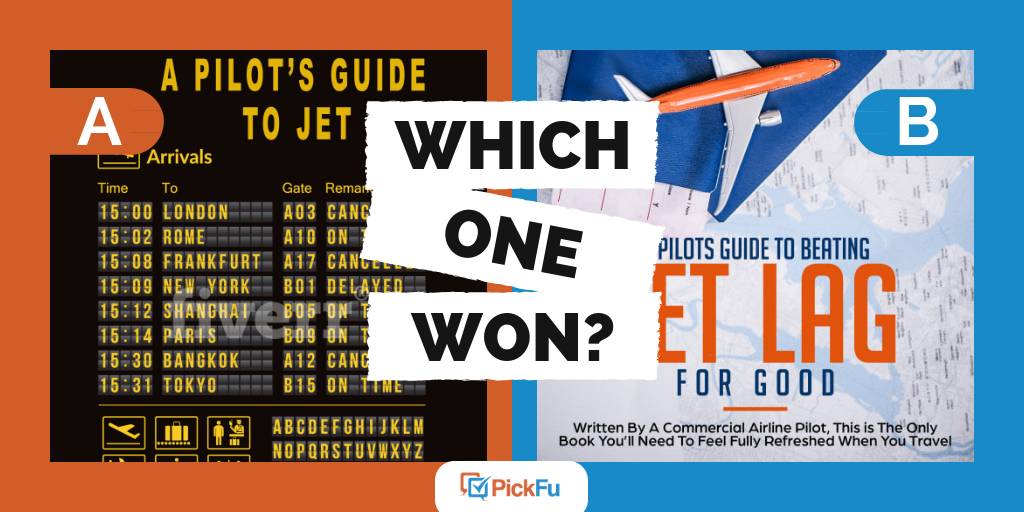 There’s something appealing about reading a book from an insider’s perspective. It could be a book about being a paparazzo, or a midwife, or a maid. If there’s the magnetic pull of secret, insider information, we want to know it.

But there are ways to make even the most intriguing insider books stand out. One airline pilot wrote a book about tackling jetlag — from a pilot’s perspective — and created a PickFu poll to test two covers and titles.

Option A features a yellow-and-black illustration of a flight information display system. Option B shows two passports and an airplane laid over a map. The subtitle is long but neatly tucked under the prominent title.

And the winner is…Option B! With a whopping 84 points to Option A’s 16, it’s clear people greatly favored Option B’s cover and title.

Some respondents liked the creativity behind Option A’s cover but most found it cluttered and difficult to navigate.

One respondent said, “Choice A is really creative and interesting, but it’s just too busy to be an effective cover. It takes too long to cut through all the text to get to the actual title.”

Another respondent acknowledged that while pilots might find Option A’s cover interesting and fun, non-pilots reading the book won’t appreciate it nearly as much.

“[Option] B is a lot easier to ingest,” she said. “You can clearly read the title and know what the book is about. I can see that [Option] A might be a little more fun for a pilot, but if someone who is not a pilot wants to read it, [Option] B seems friendlier to them.”

When you’re writing a book from an insider’s perspective, you want to appeal to outsiders, too.

The title stands out but may have also skewed the results

The author asked respondents to give feedback based on the title as well as the cover. This is what’s called a double-barreled question, and these questions are a common polling bias.

Even though the main title on both covers is the same, only Option B has a subtitle. This subtitle helps makes it clear that the book is authored by an airline pilot who will help you learn to beat jet lag. As one respondent said, “I like both designs, but ‘beating jet lag for good’ is just an amazing [subtitle].” Another added that “‘[a] guide to beating jet lag [for good]’ sounds better to me for a title. Sounds like you will learn how to not have jet lag, which appeals to me more.”

Others agreed that Option B’s title is more punchy and to-the-point. Who knows… the addition of the subtitle may have helped Option A fare better. That’s why the poll is biased. People were asked to rate both the cover and the title but only had room for one answer.

Most people love to read a book about something from an insider’s perspective, but the cover can’t be so entrenched in the insider view that it shuts outsiders out.

If you’re writing a book from an insider’s perspective, create a welcoming cover that hints at the fun details inside but doesn’t make sense only to people who are insiders along with you.

And make sure to let readers know clearly that you’re a pilot/midwife/paparazzo/maid/chef/whatever — someone with a trove of intriguing details to share with the world.

Finally, keep your poll unbiased by only asking about one thing. Learn more ways to write unbiased poll questions here.

Do you have an insider’s perspective on something? Are you writing a book about it? Bring your cover and title options to a PickFu poll and find out which ones appeal the most to your future readers!