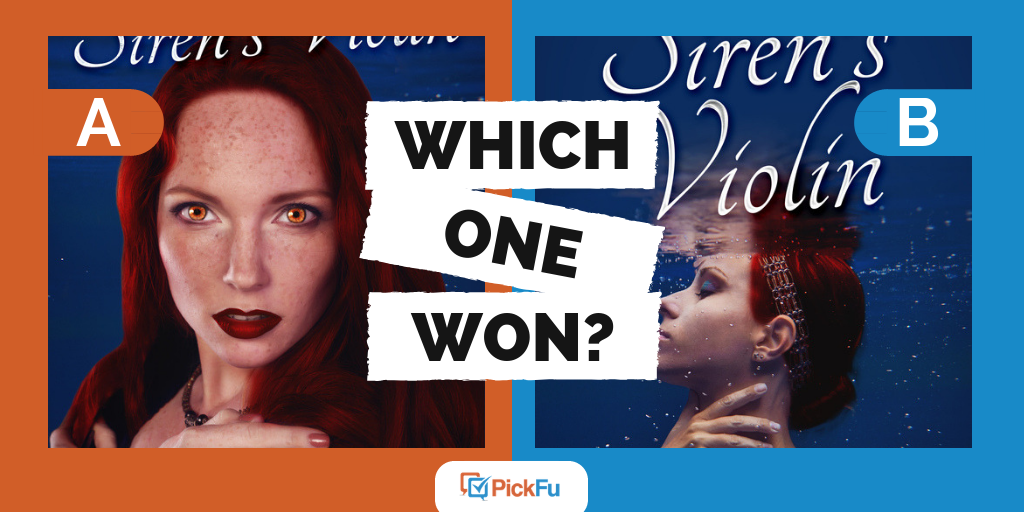 Even the smallest tweaks on the design of a book cover can have a positive impact on book sales. One recent PickFu poll demonstrates how photo editing and object placement can significantly alter the reactions of readers.

Author Amber Zygutis asked the test panel participants which cover they preferred for her novel The Siren’s Violin. Option A presents a dark red-haired woman staring at readers with alarming, orange-colored eyes. Option B features an underwater shot of a red-haired woman with eyes closed and her head turned to the side. Can you guess which one won?

92% of voters preferred the side-facing woman of Option B over the head-on shot of Option A.

Why Did It Win?

Photo Editing on Book Covers… How Much Is Too Much?

In describing the cover of Option A, respondents reacted to the artificial look of the woman by using descriptions such as creepy, scary, witchy, odd, aggressive, and too intense. Two respondents even used the term uncanny valley (describing when androids look a little too much like humans).

Part of this unnatural look is attributed to the abnormal eye color of the woman in Option A. One respondent describes the eyes as “a little too intense and fake looking.” The woman in Option B isn’t showing any eye color because her eyes are closed, so any editing of her photo is less obvious. The makeup also appears far more edited in Option A than Option B.

How to Increase Intrigue in a Book Cover

This poll also demonstrates how the angle of the subject can impact the interest of potential readers. Nearly a third of the respondents found Option B to be more “mysterious.”

Many contributed this mystery to the fact that it features an underwater photo. Almost a third of the respondents noted this as one of their reasons for selecting Option B. One respondent made an interesting observation, noting that “Mythologically, sirens are associated with water, so B with the lady submerged does fit the theme better.”

Several attributed the mysteriousness to the fact that the woman is facing to the side, which contrasts the head-on shot in Option A.

Participants also noticed the proximity of the women to the camera. The woman in Option A seemed too close for many. Option B’s distance, on the other hand, seemed to add to her mystery.

What Does This Mean For You?

Small adjustments can make big differences for you in publishing your novel. Read more about simple changes that can boost eBook sales and create your own PickFu poll here.