bell hooks. Mark Twain. Pablo Neruda. Maya Angelou. What do these four famous author and poet names have in common?

Authors use pseudonyms for a variety of reasons. Neruda used a pen name to avoid bringing his family shame — they didn’t approve of his poetry.

bell hooks chose a name that honored her great grandmother, Bell Blair Hooks, but styled it in lowercase to shift attention toward her ideas more than her persona.

Whatever the reason, choosing a pen name can be hard.

One author recently took to PickFu to ask 50 people who listen to audiobooks and read at least one book a month to decide on their favorite of three pen names.

The author asked, “Which pen name do you like more? Context: I write histories, biographies, and historical fiction novels for men and women aged 25 to 50.”

The three pen name choices are as follows:

And the winner is…Option C! Options A and B both received the same score — 24 — but Option C earned a score of 52.

Respondents found that the names “John Davis” and “John Jackson” sounded too bland to incite any sort of intrigue.

Said one reader, “I prefer the last name ‘Paine’ out of the three options. It sounds the most unique and least generic. The name ‘John Jackson’ is my least favorite because it sounds way too made up.”

Another agreed, adding, “John Paine sounds like a fun author name, it makes me intrigued about the subject matter. John Davis and John Jackson are way too generic.”

A third respondent pinpointed a notable difference between the three names: “John Paine is better because it has a little more personality to it. The other names are a little too plain but Paine has a second meaning so that makes it a better option to me.”

When a reader sees the last name Paine, they’ll naturally make a connection to pain.

And that simply makes for a more interesting name.

While you could argue that any of the three names can be found in the annals of history, some respondents felt that “John Paine” had a nice, historical ring to it.

One respondent mined her knowledge of American history and came to this conclusion: “‘John Jackson’ reminds me of Andrew Jackson — a little too masculine. ‘John Paine’ reminds me of Thomas Paine — a worthwhile person to emulate.”

A male respondent agreed, writing, “I like John Paine the most because I feel the name fits in really well with early American history (various founders named John, as well as Thomas Paine).”

Since the author’s niche is history, historical fiction, and biographies, it makes sense to choose a pen name that directly reminds readers of historical figures.

Key takeaways for choosing a pseudonym

If you’re looking for a pen name that fits the genre you write, PickFu’s respondents can help you narrow down your choices.

Before you bring your options to a poll, think about how well the choices fit your genre.

Are you ready to test your potential pen names on PickFu? Create your poll today, select an audience of readers, and get results back in as little as 15 minutes. 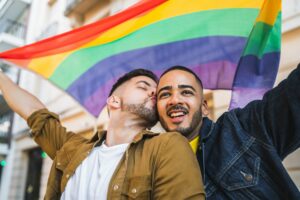 Happy Pride Month! 2020 marks the 50th anniversary of LGBTQ+ Pride traditions. To celebrate, we used PickFu to ask 50 heterosexuals, “Are there questions you’ve always wanted to ask someone … 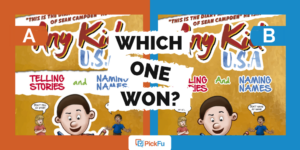 Which One Won? Graphic design secrets in middle-grade​ books

When it comes to selling books, the littlest details can make the biggest difference. One author of a middle-grade book (read: for kids ages 8-12) recently ran a PickFu poll … 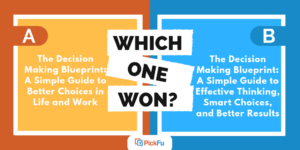 Which One Won? Deciding the best book title ideas for a book about decision-making

Even authors who write about how to make decisions more effectively need assistance when making a decision about their book title ideas. One such author took the question to PickFu …