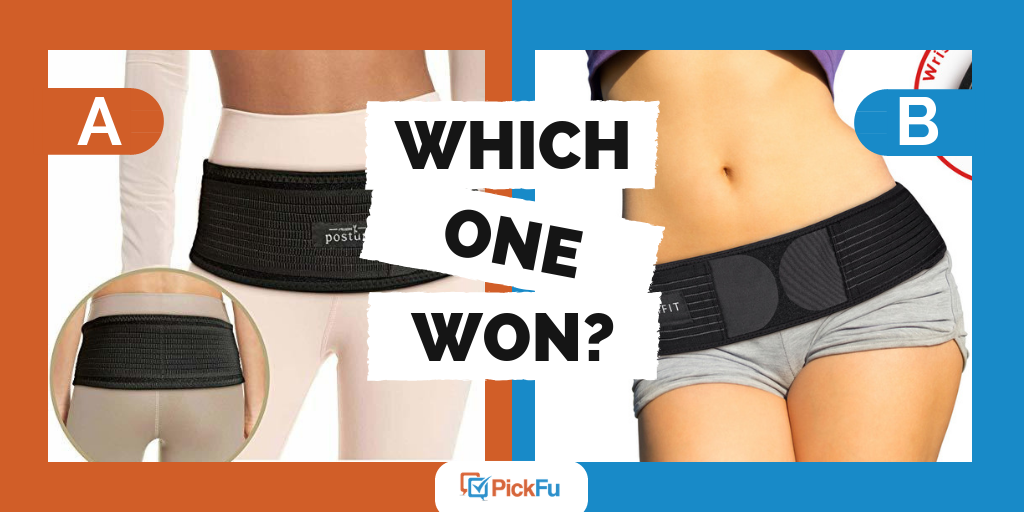 “Sex sells” might be cliche, but the reason the phrase has stuck around this long is that it’s true. And it’s a good thing to keep in mind when selecting product images.

In a recent PickFu poll, an online seller ran a split test asking respondents to choose between two featured images for an exercise belt.

And the winner is… Option B, by a majority of 32 out of 50 votes. However, when the results are broken down by gender, more females chose Option A than Option B. Let’s review what we can learn from this example.

“Not going to lie,” one 25-34-year-old male wrote. “[S]ex sells.” And he’s right: especially for this product. People who work out want a sexy beach body, so it’s a no-brainer that you want a fit, attractive model with killer abs in your e-commerce product image. The model in Option A wears pants that cover most of her skin, and the part of her stomach that shows doesn’t look especially toned. By contrast, the exposed torso in Option B shows off the model’s physique. Option B serves as fitspiration, showing people the kind of body they could achieve if they buy this product. As one male wrote, “I prefer B since it shows you the ideal flat stomach that the customer would want.”

In addition to noting the exposed skin as a reason they preferred Option B, two participants mentioned that they preferred the sensual, arms-up pose in Option B, with one male calling it “sexually appealing.” Another respondent called the model in Option B “athletic.”

The wrist wrap sweetens the pot

A major difference between the two options in this product image test: Option B informs us that a wrist wrap is included. This product add-on gives the buyer more bang for their buck; they get two pieces of exercise equipment instead of one. So it’s no surprise that six people cited the wrist wrap in their reasoning for choosing Option B.

When using sex to sell a product, keep in mind that men and women may react differently, as they did here. Based on the women’s comments in favor of A, some of them actually had a bad reaction to B because of the sexy image. “[B] looks like are [sic] just using an appealing body to sell it,” one female between the ages of 25 and 34 commented. [Option] A “[l]ooks much more appropriate.” Two women wrote that Option B “shows too much skin.”

Think about whether men or women are your target customer — who is more likely to buy the product? Once you know that, surveying 50 people who identify as that gender may be more helpful than surveying a mixed-gender audience.

The images tested in the poll had a lot of different variables: the model, the wrist wrap, and the brand name. Because the product image and the brand name are both hugely important, they deserve separate polls. As it stands, the difference in name may have colored the audience’s opinion of the overall image, which may not be what this pollster wanted. Two of the respondents that picked Option A did so the model’s pose aligned with the brand name “posture.” The two names also bring up a point of confusion: is the item for fitness or posture? Perhaps this is information the tester should have given the audience before they voted. Learn testing best practices, including the importance of consistency in test options and how to write unbiased questions.

Are you trying to optimize your product listings? Create a PickFu poll to split test the choices