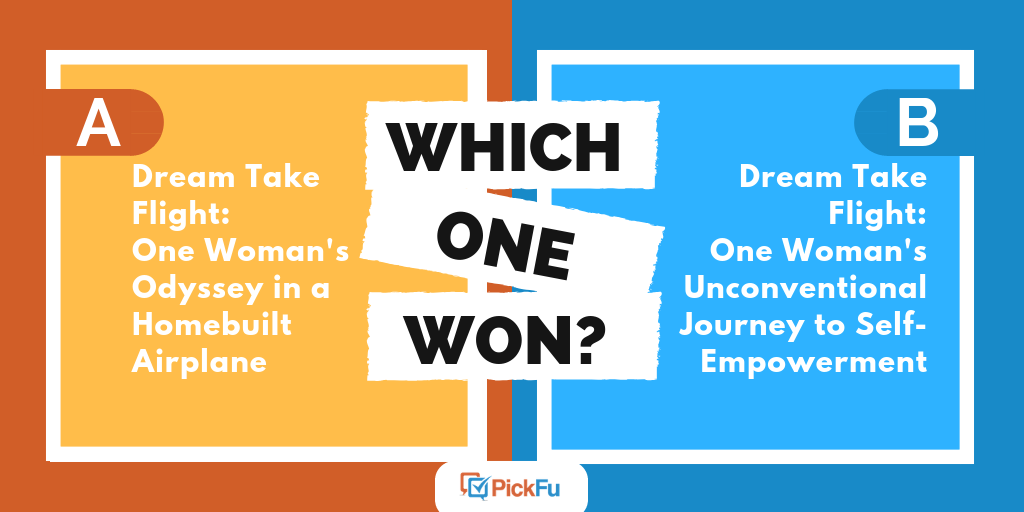 One author created a PickFu poll that asked respondents which title would compel them to purchase the book. The two options had the same memoir title (Dream Take Flight) but a different subtitle.

Memoir titles should reflect that it’s a memoir, not a self-help book

Many respondents liked how Option A makes it clear that the book is a memoir. Said one respondent, “The second option sounds like a billion other self help books” while “The first [actually] tells me what the book is about: a woman’s homemade airplane and how it affected her life.”

If you’ve written a memoir, you don’t want people to confuse it for a self-help-style book. By creating a memoir title that borrows specific details from your story, you ensure that your book will stand out.

The promise of adventure and mystery helps draw in readers

Several people who voted expressed delight at the word odyssey in Option A. For them, the word shouts, “You’ll find an adventure in this book!” And who doesn’t want to dive headfirst into an adventure?

The mention of a homebuilt airplane also intrigued respondents. One woman said, “the idea of a homebuilt plane is too exciting not to lead with.” There are bound to be plenty of exciting moments when a homemade plane is involved.

Other respondents even found Option A’s title mysterious. How, readers might wonder, will a homebuilt airplane actually fly? The mystery is enough to get them reading.

While some respondents liked Option B’s wordier title, many found it too long. Option A’s short, specific title appealed to them. One respondent said that Option A “is shorter and easier to process,” while another added that the title “reads more naturally.”

Short doesn’t have to mean vague. Even though Option B has a longer title, respondents found it more confusing. Option A succeeds by not only staying short but also by packing its few words with power. The association between an airplane and a dream taking flight is clearer.

One respondent said that Option A “Seems way more interesting. Like [the author] accomplished something great.”

All this is conveyed in a short but effective memoir title.

Have you written a memoir? Even if it’s not about something as exciting as building a plane, it’s almost certainly got powerful details about your life.

When you’re crafting your title, think of the most central and meaningful concrete fact or event in your memoir and use it in a way that attracts the eye.

And finally, remember that shorter, less dense titles are more likely to stand out to readers. They’re easier to process, giving potential readers lots of meaningful information in a short amount of time.

Need help deciding which title to use for your memoir? Use split-testing to create your own PickFu poll and find out what your potential audience thinks.