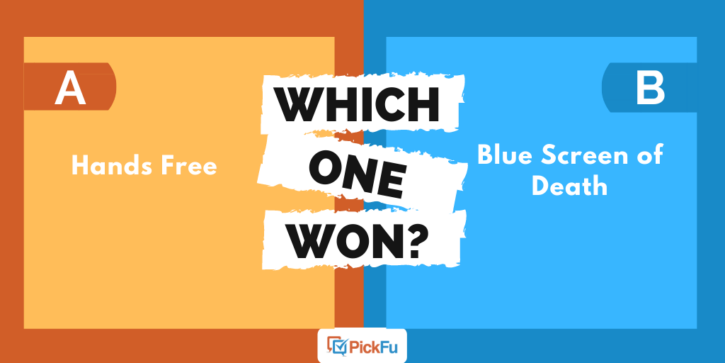 Few things are as difficult — or as important — as choosing the title for a book. If you’re writing crime fiction or a mystery, your book title should intrigue your reader and create tension, not confusion.

In this PickFu poll, the user tested two titles with an audience of crime and mystery readers between the ages of 18-34.

Here are the title options:

Let’s find out what these readers were thinking.

Face it: death is interesting

Death is a mystery. Every death represents a story of a life lived and lost. Put the word death in a book title and readers are bound to wonder how it happened, to whom, and why.

That seems to be the case for respondents who voted for Option B, Blue Screen of Death. The title made them curious to know more.

Some were drawn to the implied technological aspect of the book — the phrase, Blue Screen of Death, refers to the rare but serious error screen on a PC — and to a potentially “spicier” plot.

“Both of these names are broad enough that they could be about so many different things and that intrigues me,” one person wrote. “However Blue Screen of Death hints at more salacious topics: death, murder, mystery, frustration, etc. It is a bit ‘spicier.’ ”

Another respondent said, “It makes me think of a dystopian society where people are addicted to their phones and it is killing their souls. I could be way off, though!”

Option A, Hands Free, on the other hand, reminded one reader of a self-help book. Not exactly exciting, is it?

One tip for the PickFu user who ran this poll: when designing the book cover, make clear that the book is a techno-thriller (if it is one!) so that readers who don’t care for this genre aren’t unpleasantly surprised.

“Blue Screen of Death appeals to me more, as a reader, because I am quite interested in death. Therefore, the title alone would entice me to read Option B.”

“Option B: makes me curious as to what is the blue screen about and how is it related to death. The title itself has so much potential and giving me the assumption that it will be entertaining to read. Option A: makes me think of a self help book about home DIY.”

“Blue Screen of Death reminds me a lot of computer issues, but it could have other meanings and is thus intriguing.”

“Hands Free is an appealing title to me. It could mean a lot of different things. Intriguing. Blue Screen of Death sounds brutal.”

While Blue Screen of Death is a compelling title that suggests a tech-related sci-fi thriller, it’s still somewhat open-ended.

On the other hand, Hands Free is so vague, it could be a book about DIY home renovation, as one reader pointed out.

What would the results be if respondents had to choose between two titles with the word death in them? Or at least two titles that were equally specific or intriguing? Here’s one way to find out: come up with a few more titles and run another split test.

Need help crafting your book title? Check out our guide to writing a book title that sells.