When choosing this home decor product, it all comes down to one word 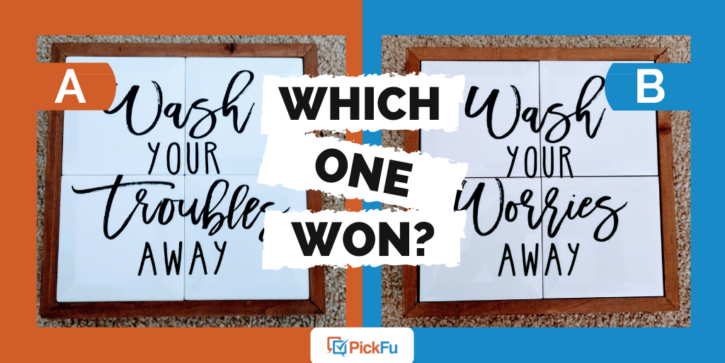 In this PickFu poll, the user couldn’t decide between two home decor signs. Both feature an inspirational saying written on white tiles using the same two fonts. There’s one small difference. Option A says, “Wash your troubles away.” Option B reads, “Wash your worries away.”

Why does worries resonate with so many people? How much difference can a single word really make? Let’s look at respondents’ comments to understand.

Respondents focused mostly on the sound of the phrase. Those who voted for Option B liked the flow of the words wash and worries, saying the alliteration makes the phrase sound “catchy” and “whimsical.”

“Easier to say the phrase,” one person wrote.

But alliteration wasn’t the only factor at play. Some respondents looked at the two options from a psychological angle. Option B’s message is more relatable and inspiring, they said.

“I prefer worries to troubles because worries are internal and are something a person can control,” said one respondent.

Another person elaborated on the idea, saying, “I like the idea of using worries instead of troubles. Even though they mean the same thing, really I think worries has a more positive or less threatening tone to it.”

Still, some respondents who voted for Option A said that troubles is the more melodic word and the phrase “Wash your troubles away” is more popular, citing its use in songs.

One thing’s for sure: the results are sure to wash away any doubt for the PickFu user who ran the poll.

“I think the worries [in Option B] fits more people’s problems, worries often tend to turn into troubles so washing away the lesser one would do more positive in the long run. Also the image overall looks more crisp and brighter in tones.”

“I liked Option B better because Wash and Worries both start with W so it sounds better and flows better when you say it out loud or in your head.

“I like Option A better because, in my mind, if my troubles are washed away, then I won’t have anything to worry about. I’m sure that sounds dumb, but that’s how my mind works these days.”

“I think that ‘wash your troubles away’ [Option A] is a more memorable quote than the other option. Ultimately, I think that it sounds better too and would be the product I’d be more likely to buy, were I in the market for such.”

“Wash your worries away [Option B] has a slightly more pleasant and calm sound to it so I prefer that a little more.”

With any product that features a written saying, phrasing is crucial. People seem to find alliteration pleasing to the ear, but as the comments in this poll show, many also have strong psychological connections to certain words.

Rather than guessing how the minds of your customers work, why not ask them directly?

For more on how to use PickFu for product selection, check out this guide to product sourcing for Amazon FBA sellers.

Results by gender identity (there were no non-binary respondents in this survey):