When being wrong is the right answer 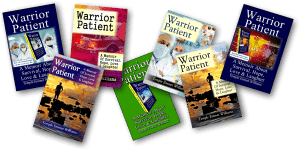 “What the hell’s wrong with my cover?”

Temple Williams reacted as most of us would at the suggestion he test the cover of his self-published book Warrior Patient.

But Williams, who has worked at several ad agencies and Reader’s Digest, knows that polling is powerful. “I hate it when [polls] tell me I’m wrong,” he wrote to us. “But it’s even worse to get the project wrong because of the power of self-deception.”

On his blog, Williams mused that writers are prone to self-deception and often turn their perceived notions into certainty. “We know something we wrote sounds great. We think the book cover we chose looks great. Yet for some extraordinary reason, the audience forgets to applaud. They take their wallets elsewhere.” 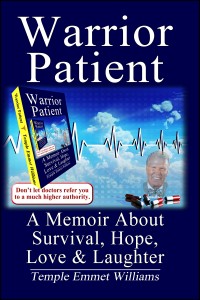 A fellow author suggested that Williams test his cover art. Though reticent, he designed six new covers, hoping to prove that his original layout was indeed the best. He consulted his wife, who helped him eliminate three of them as potential covers. With three designs left, he took his least favorite and tested it against the cover he had used, trying to prove a point.

He turned to PickFu, and was shocked at what he found. 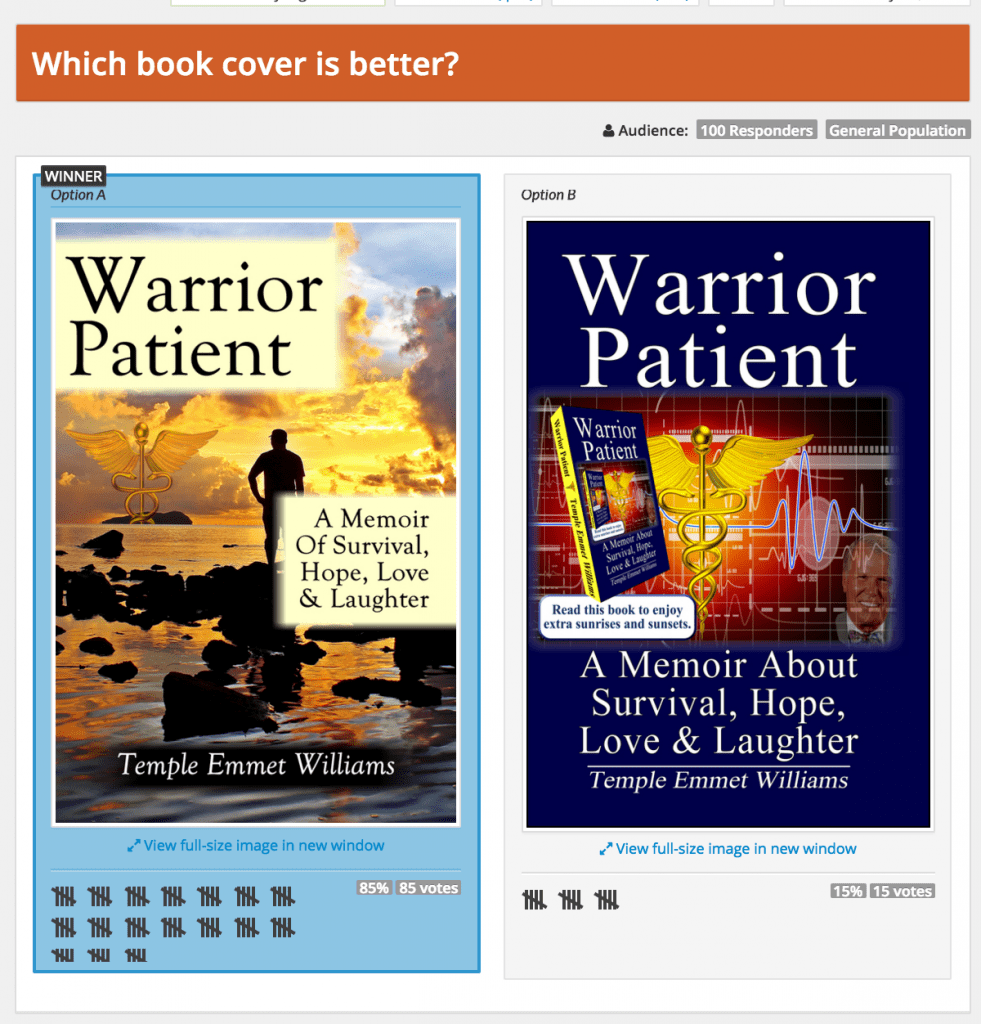 His least favorite cover was overwhelmingly favored in the poll.

Respondents preferred what he thought was his worst book cover design. It wasn’t even close: 85% chose the alternate cover over the existing one. “Having strangers say that my judgment sucked did not feel good,” he wrote. “It felt great. It uncovered a problem of which I had no willing or willful awareness.”

But Williams was still a bit skeptical. He had two cover designs left. One featured a man facing the sunset. The other showed medical staff, including a woman whose eyes were so piercing that her cover was Williams’s preference. 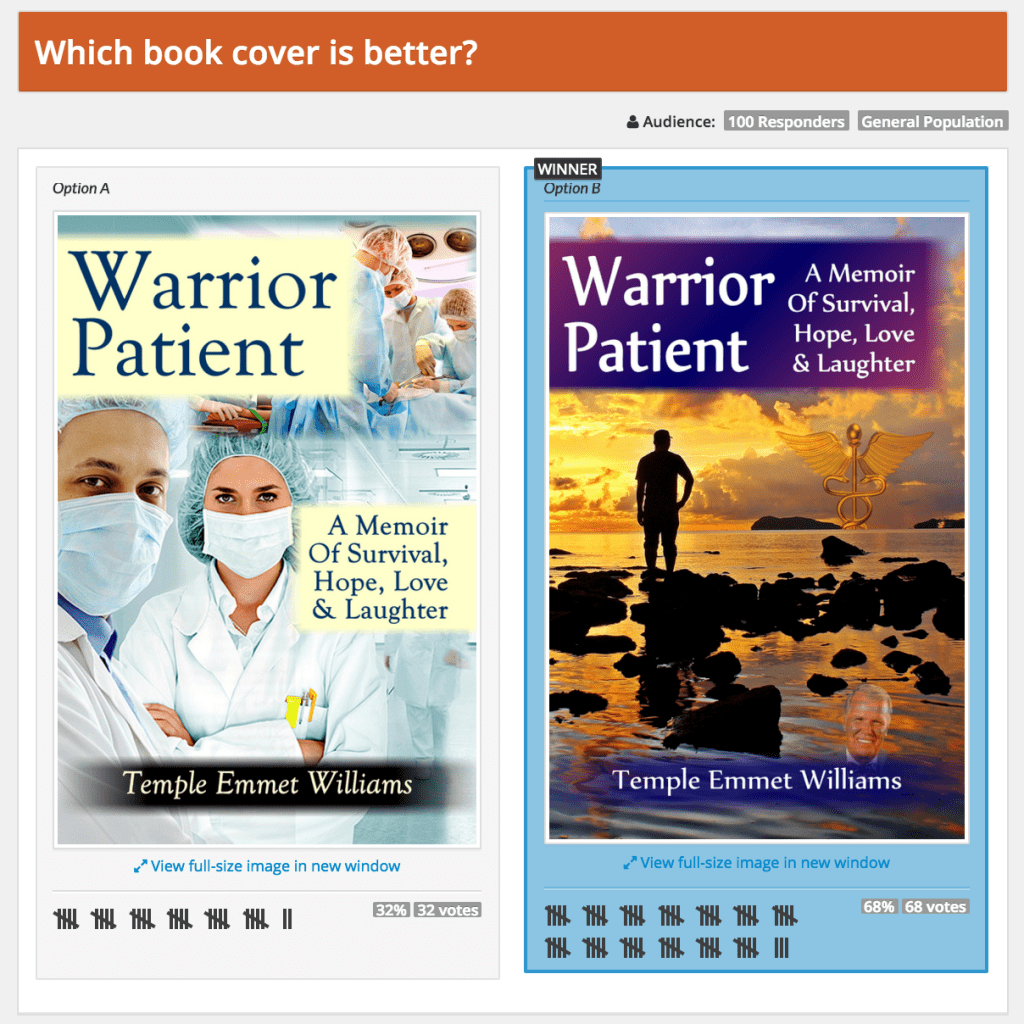 The author loved the doctors. Readers were creeped out.

Much to his shock, the photo of the medical staff was off-putting, and those piercing eyes didn’t help. While the results were closer, 2/3 of respondents still preferred Option B.

Some typical responses in favor of the sunset made Williams aware of something he hadn’t even considered: doctors can seem scary, especially behind masks.

With two clear winners from his two polls, Williams tested them head-to-head, and doubled his sample size. 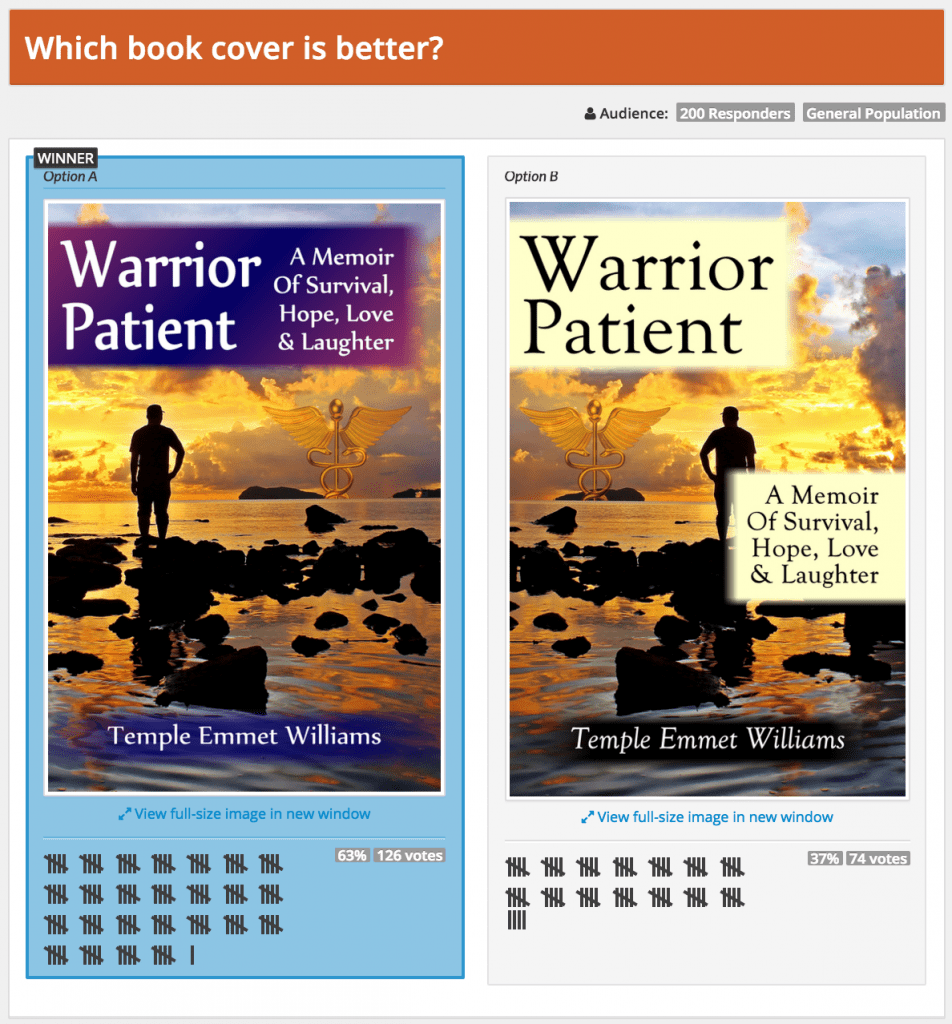 Williams was sure this final matchup would be close. It wasn’t. 63% of respondents preferred the purple version over the yellow. They found it warmer and more inviting, and remarked on its readability. They also associated the color scheme with hope, vibrancy, and inspiration. Williams said, “All of the information people volunteer when they make their choices, the words they use and emotions they reveal, become a goldmine for improvement.”

Feeling confident in the appeal of the purple cover, Williams re-released his book. What difference has it made? “I believe that change has a direct connect to the book receiving a B.R.A.G Medallion, and also a 2015 Gold Medal in the Reader’s Favorite Book Awards,” the author beamed. 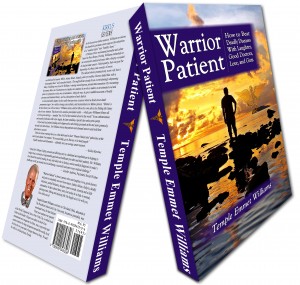 “I like to joke that, before PickFu, a lot of my friends crossed the street when they saw me coming. They knew I might corner them, and pester them about book titles, subheads, and covers. That has all changed.” With the help of PickFu, Williams says, “It takes a lot of the guesswork out of your guesswork. They also have a number of coupons and promotions that allow you to have discounted surveys done!”

Williams’s success story is summed up by a blog post he titled, “When in doubt, grab a poll.” Famed author Pat Conroy might agree, advising, “Write like you’re in love. Edit like you’re in charge.”

6 comments on "When being wrong is the right answer"