Which One Won? Choosing a children’s book title about losing a pet 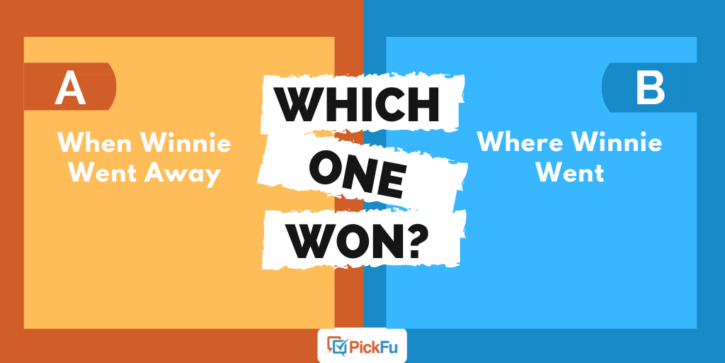 Reading a book about losing a pet might help you grieve the loss of your own, especially if you’re a kid. For one author, deciding on a children’s book title for a story about losing a dog was a challenge of its own.

So, the author put three options up in this PickFu poll and asked 50 dog owners which title made them more likely to buy the book:

The titles are similar. But, as the results of the poll show, one word can have a big impact on potential readers.

And the winner is…Option A, When Winnie Went Away. With a score of 56, Option A narrowly beat Option C’s 44 points. Option B scored only 26.

Let’s see why one word made the difference for Option A.

Respondents said Option A sounded the most final of the three titles and was most appropriate, given the topic and the book’s target audience of young readers.

“I think Option A is the most descriptive and easier for a child to understand and learn from,” wrote one respondent.

The title is “sweet, sad, and to the point,” said another. “It works well for the subject of the book.”

“It sounds like the pet passed, best option,” added one respondent.

A female respondent pointed out that the word When in Option A is “more immediate” than After in Option C. “I feel that a parent shopping for a book on grieving the loss of a pet would want one for the feelings that come immediately following the loss,” she wrote.

By contrast, Option B didn’t make clear that Winnie had died.

As one respondent put it, “By saying that Winnie ‘went somewhere’ (Option B), I feel like it raises the specter that the child could somehow ‘find’ the pet in another location.”

Another reason respondents preferred Option A over Option C? Alliteration.

“I will almost always pick the choice with alliteration,” said one respondent. “I just love it looks and the way it sounds.”

“Option A was my favorite because it flows off the tongue very well,” said another. “The other two choices have potential, but they are just kind of awkward sounding.”

Alliteration adds poetic rhythm to a sentence, phrase, or title, which can be comforting to a child grieving the loss of a pet.

Respondents favored the finality of Option A.

The subject of death can be confusing and upsetting to kids as it is. An open-ended book title about the loss of a beloved pet only adds to the confusion. Young readers might think the animal in the book isn’t actually dead, which could prevent them from fully grieving their own loss.

In addition, the respondents liked the use of alliteration in Option A, which gave it a poetic flow, perfect for a reader in need of comfort.

Do you need feedback on titles for your children’s book — or any book? Create a poll on PickFu to test them, as well as your book cover designs and blurbs, on a targeted audience of readers.