How to split test Facebook ads on a budget 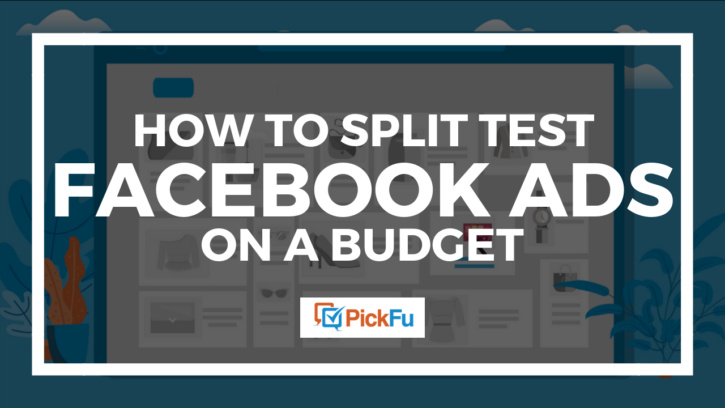 Split testing (also known as A/B testing) is a method that gathers data to help your campaigns perform more effectively. There are many ways to do this, including split testing on your website, on platforms like Google Ads, and split testing on Amazon. In this article, let’s discuss how to test Facebook ads, both using Facebook Ad Manager and an alternative (and perhaps cheaper!) method using PickFu.

Split testing Facebook ads helps you learn which ad creative, audience, delivery, or placement best meets your marketing goals. The test is created by showing two or more versions of an ad to see which one performs better for your chosen variable. Once your split test is complete, you can use the data to help improve future campaigns.

It used to be that you could only test different ad creative on Facebook. You could change the image, the headline, or copy of the ad, but you couldn’t test much else unless you used the Facebook API. Last year, Facebook introduced its split testing feature to everyone within its Ad Manager. Using the split test feature, you can test these variables:

In order to create a split test on Facebook, you can either use Facebook’s Guided creation, use Quick creation, or duplicate an existing ad set.

When you split test ad creative on Facebook, you pay for every click or impression (depending on your campaign setup). Alternatively, many advertisers like to use PickFu to optimize their ad creative before pushing it live to a Facebook campaign. Why?

There are several benefits to split testing Facebook ads on PickFu rather than on the Facebook platform:

Split testing Facebook ads with PickFu will only test the Creative variable. For all other variables (Delivery optimization, Audience, etc), use the method described in the “How to test Facebook ads using Ads Manager” section of this article.

How to create a PickFu poll to split test Facebook ads

One of the best ways to replicate the look of Facebook ads is to create your ads on Facebook, take a screenshot, and then use these screenshots as your PickFu testing options. Here’s an example to walk you through the steps:

After running this poll, Option A won. Respondents preferred the idea of judging a book by its cover. The poll took only 13 minutes to complete, whereas if we had run a live split test on Facebook, it would have taken 3-14 days.

The difference between testing on Facebook and testing with PickFu is that on PickFu, users see the various test options and weigh them against each other. On Facebook, they’re not aware a test is happening. They’ll only see one of the ads in your ad set, and they’ll only click on the ad if they were going to do so anyway.

PickFu provides a quick and dirty way to ensure that before you go live on Facebook, your ad creative has already been tested with an audience. Respondents provide valuable feedback about what they think about your ads, including how they perceive its tone, helpfulness, and appeal.

Want to split test your own Facebook ads using PickFu? Set up a poll now — it only takes a minute!