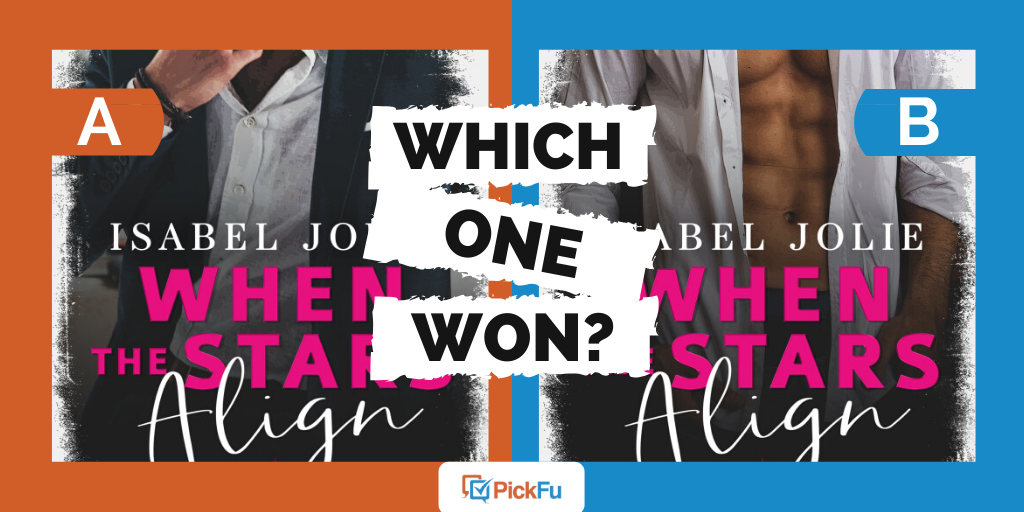 There’s nothing like walking through the Romance section of your local bookstore. Bared abs and breathy-looking women abound. If you’re brave enough to pluck a book from the shelf, you spend the entire time at the cashier’s desk hoping no one judges your reading choices.

But what if nudity isn’t the only thing that can sell a romance novel? One publisher tested this question in a recent PickFu poll. She posted two romance book cover ideas and asked an all-female audience, “Which book cover do you like better?”

Option A shows a fully dressed man in a suit. A stubbled chin turns to the side; the top buttons of his shirt are open.

In Option B, we get standard Romance-cover fare: a full set of ripply abs and pecs.

And the winner is…Option A!

Surprised? Read on to find out why the abs didn’t win.

So, here’s the thing. Most women really would rather not walk through the store with a cover featuring a half-naked man.

The unbuttoned shirt and suggestively stubbled chin are enough to capture a woman’s attention.

As one respondent said, “I like that he is fully clothed in this image but still seems very sexy. He looks professional and capable which is very appealing without seeming raunchy and embarrassing to hold.”

What if a woman’s embarrassment is the reason she chooses a different book and not yours? Yikes! Better tell your male book cover model to leave his shirt on.

Several women mentioned that a fully clothed man with a bit of face showing hinted that, as one respondent put it, the book isn’t “just about sex.”

Another respondent agreed, saying, “I chose [Option] A because the book cover makes you think the story will have some substance and a storyline. [Option] B makes me think the novel is only about sex.”

Women also liked the suit jacket, along with the man’s bracelets and sunglasses. Combined, all the touches on Option A’s cover added intrigue for respondents. As one woman said, “I like the mystery and potential ideas for backstory that automatically come to mind.”

Women don’t just want to read a sexy book. They want a sexy book with a real story pulsing through it.

Think about the audience’s age

While women of all ages loved Option A, women in the 25-34-year-old range actually preferred Option B. They loved the shirtless abs and the hint at an erotica novel more than a romantic story. 18-24 year-olds were almost evenly split between the two.

This shows the author that younger women are more open to the idea of a shirtless man than some older women. And it drives home the point that you should always look at the demographic breakdown of your poll results to see who voted for which option.

Whether that has any bearing on your ultimate decision is up to you. You may also want to consider running a follow-up poll narrowing down the target audience even further by age group.

While some females love seeing a shirtless man on a book cover, most would rather see a subtly sexy dude with a suit and some stubble.

Adding some complexity to your cover hints that the novel will have an intriguing plot — not just a bunch of sex scenes that’ll make a reader feel awkward while squished between two seatmates on a long flight.

Do you need help choosing a cover for your romance novel? Create a poll on PickFu today, and you’ll get results in as little as 15 minutes.