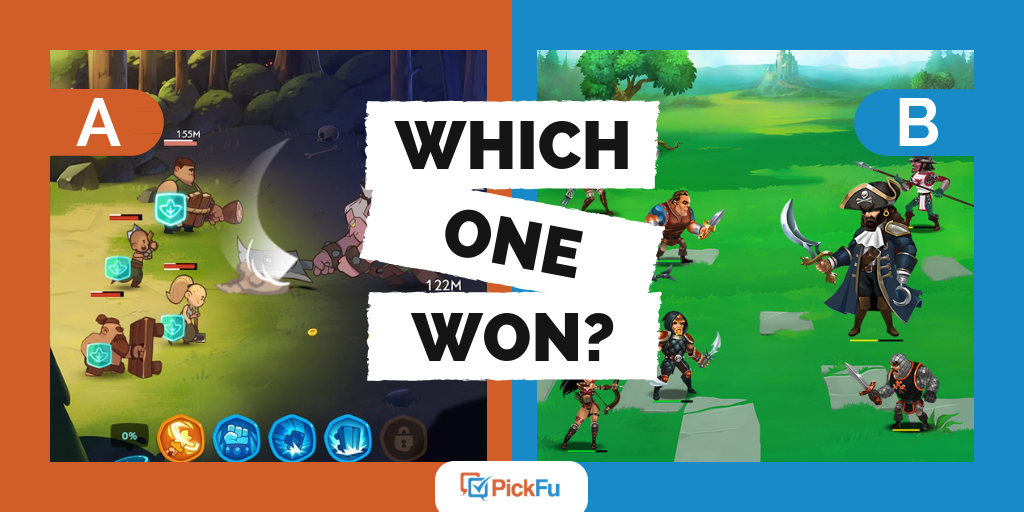 Split testing with PickFu is useful for deciding between design aspects of your app or website, but it’s also effective for validating any new mobile app game ideas you have. Before investing too much time or money into a new game concept, you can create a PickFu poll to find out how well your idea is received by an audience.

That’s exactly what the creator of this poll did, showcasing screenshots of two different mobile games and asking which one the audience would be more likely to play.

Can you guess which mobile game idea won?

The winner is Option A! The first mobile game idea won the poll with 58% of the total vote, while Option B came away with a respectable 42%.

What drew more of this mobile gaming audience towards the screenshot of the first game? Let’s take a look at the key factor.

The biggest theme in the written feedback was how much respondents enjoyed the darker colors of the background in Option A. Several comments from both males and females of all ages pointed out their preference for the dark background because it looks more interesting, intriguing, rugged, or mysterious.

“[Option A] looks a bit spooky, and I like the theme of the characters better too,” said one male respondent. A female commented that “the dark colors make it look more mysterious and exciting.”

The feedback from respondents is specific, detailed, and sometimes surprising. If you want to dig into the feedback even further, PickFu allows you to follow up with specific respondents directly.

Mobile games have so many components, from environmental design to character animation to icons to logos. Use PickFu to test any of these elements with an engaged mobile gaming audience, helping you to confidently move forward with development.

With each poll you run, you’ll receive demographic data on the participants and valuable written feedback from each of them. Every poll starts at just $50 and can be completed in as little as 15 minutes.