The Best and Worst Mother’s Day Gifts, According to Moms 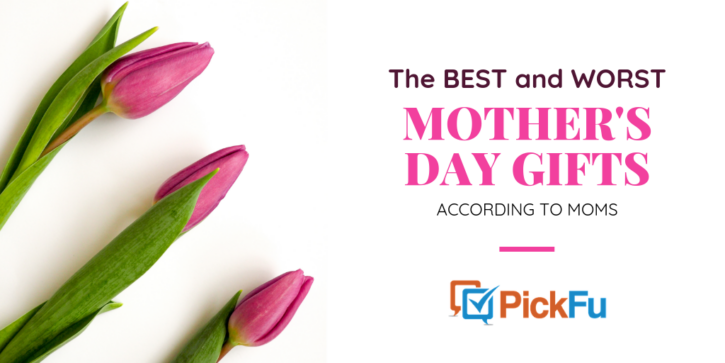 Mother’s Day became an official U.S. holiday in 1914, but that doesn’t mean the past 100+ years have taught us to do it right. We surveyed 100 moms to ask them the best and worst gifts they’ve either received, given, or heard about. We also surveyed 100 general audience respondents for their thoughts on the best and worst Mother’s Day gifts. They shared what worked (and didn’t) with the moms in their lives, too.

Moms agree: vacuums are the worst

Traditionally, mothers do the bulk of cleaning in a household. Though men are doing more these days, they still haven’t achieved parity with women’s chores.

Therefore, don’t give a gift that reinforces this imbalance. The top target of women’s ire: vacuum cleaners.

The worst Mother’s Day gift I ever heard of someone receiving was a young mother who received diapers and a vacuum cleaner from her husband. She kept bursting into tears even when retelling the story while he just stood around looking embarrassed. He thought he was showing her how good a mother she was but instead, he neglected to show her how special and important she was to him and their family.

I heard someone got a vacuum for Mother’s Day because her spouse wanted her to keep the house more clean.

The worst gift for Mother’s Day that I ever received… was a vacuum from my now ex-husband. That one was pretty bad!!!!

A vacuum cleaner is the worst gift I’ve heard of. It’s just a functional chore related item that shouldn’t ever be a gift as it’s not oriented toward a special occasion or special event, but a tool for a household drudgery chore.

Other chore-related gifts aren’t great, either

The worst gift I’ve ever received was a monogrammed iron. First off, it was an appliance that the giver would expect me to use to aid them in their lives. Further, it was not a gift, but something that the whole house needed, not just mom. Also, the fact that it was monogrammed meant nothing to me. It actually angered me and made the product less inviting every time I ever used it.

I’ve heard of a husband giving my friend a toilet plunger for Mother’s Day.

Female between 35 and 44 years old

The worst Mother’s Day gift I ever heard of was a skillet!

One of my friends received a floor cleaning machine from her husband for Mother’s Day. She wasn’t too thrilled about that.

On the other hand, you can turn all that cleaning into a fantastic gift

I think the best Mother’s Day gift I have received is a day where I didn’t have to clean, cook or anything else. I could spend the day as I wanted and all meals were done by my family.

A friend of mine got a gift certificate for 6 months worth of house cleaning! To me that is the best gift I’ve heard of and I wish it had happened to me!

Often, a Mother’s Day gift might have been perfect… if given to a different person.

I have, many times, seen people give themselves a gift under the guise of giving a gift. Unfortunately, Mother’s Day isn’t immune to this effect. For example, my friend’s son loves to go to this bar. So, he bought his mom a gift certificate to that bar. Yet she doesn’t drink!

Mother of two, over 65 years old

I received a coffee maker one year. This was horrible because I’m not a coffee drinker.

My significant other usually gets me things that HE wants for himself. I got a radar detector one year from him.

The worst Mother’s Day Gift I have given was a case of Bud Light. I had no clue what to get my mom and didn’t just want to give her flowers so I decorated a box of Bud Light beer and then slapped a card on it. She did not find it funny.

So what do moms want for Mother’s Day?

Give Mom something personal

The best Mother’s Day gift I’ve received has been stepping stones from my kids, with their handprints, dates, and names on them. They each painted one for me after doing the molds. I love them!

Mother of three or more, between 35 and 44 years old

The best gift I have ever gotten was a drawing from my child that my husband framed. It still hangs in our house.

The best Mother’s Day gift I’ve given was a custom made blanket that featured images of my mom’s children and grandchildren. This was something she was not expecting and very excited about. She keeps the blanket hung up in her living room to this day. She was very fond of the blanket and found it to be a very creative gift.

The best Mother’s Day gift I heard of was a thoughtful necklace containing all of the kids’ and grandkids’ birthstones.

Shared experiences and activities are the best Mother’s Day gifts. Tickets to a concert or sporting event, taking a hike together, a small trip, or spa day.

The best gift I’ve ever received was probably just a day to relax and do what I want. I woke up late, had brunch, and went for a good hike with my kids and dogs. It was a perfect spring day, and I felt so happy to be a mother, and we all felt refreshed and recharged.

My best gift was spending the day with my kids at the park.

Mother of three or more, between 45 and 54 years old

My favorite Mother’s Day gift was when my boys would make me breakfast – the personalizing of anyone’s time and effort is what makes it the best gift.

But beware: breakfast can backfire

The worst idea was breakfast in bed made by a four-year-old. We had syrup all over the bed…

[The best Mother’s Day gift I received was a] vacation by myself to Florida, it was very relaxing and I needed it to recharge.

The best gift I gave my mother was a week in a fancy hotel overlooking the ocean in her favorite town. She was so happy and talked about it for years. I was so glad to make her Mother’s Day so special.

[My favorite Mother’s Day gift is a] day to myself where I have all I need (time, no responsibility, money, and car) to do as I please.

And this old standby still works

My favorite Mother’s Day gift is chocolate-covered strawberries. Though I am trying to be healthier, I love chocolate. I love when my 9-year-old makes them himself.

The best was when my daughter got me chocolate-covered strawberries.

What is the best Mother’s Day gift that you’ve received, given or heard of? What about the worst? Sound off in the comments! Also, if you want to test your mother’s day present choices out, click below to start your test. Note: We also have seasonal coupons sometimes.

2 comments on "The Best and Worst Mother’s Day Gifts, According to Moms"