Which One Won? The thrill of a short book title 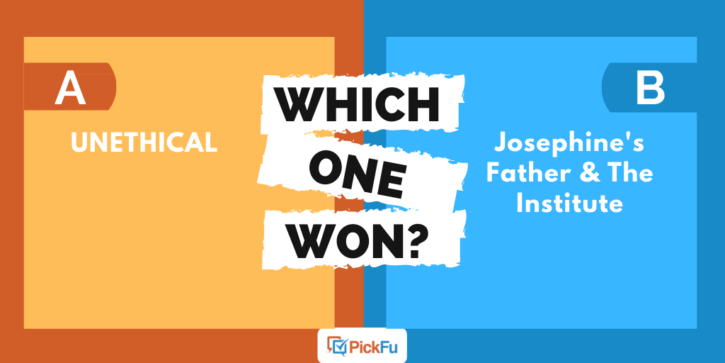 Sometimes the hardest thing about writing a book is coming up with the title. The wrong one can drive readers away, while the right one can bring them running.

So how do you decide?

One author recently took two titles for a medical/legal thriller to PickFu’s pool of fiction readers for help: UNETHICAL (Option A) and Josephine’s Father & The Institute (Option B).

And the winner is…Option A! With a score of 68 to Option B’s 32, it’s clear readers preferred the shorter title.

While Option A’s title is just one word, readers found it infinitely more interesting than Josephine’s Father & The Institute.

“I like the shorter titles that grab you,” said one respondent.

“A single-word title catches your eye the best and is the most intriguing,” another person said. “The other title kind of rolls on and on until you’re no longer interested.”

Despite its brevity, the one-word title “is memorable and intriguing [and] gives the reader an immediate feeling of anxiety that ties into the medical/legal thriller genre,” said another.

Too long and too vague

Not only was Option B’s title long, it was also unclear. “The other one is too long for a title and too vague,” wrote one respondent who voted for Option A.

A female reader wrote, “Josephine’s Father & The Institute sounds like an 18th-century book about a father who puts his daughter in an institute for being pregnant. UNETHICAL sounds like it could be contemporary and would be about something unethical that occurred.”

As another reader pointed out, “Josephine’s Father & The Institute doesn’t really seem to have anything to do with a medical/legal realm.”

Shorter isn’t always better, but in this case, the one-word title was both more interesting and more relevant to the book’s genre.

If you need help selecting the perfect title for your mystery or thriller, PickFu’s audience of fiction readers can help you decide. Create a poll today and get responses in as little as 15 minutes.