Strategies to Get Your App Featured 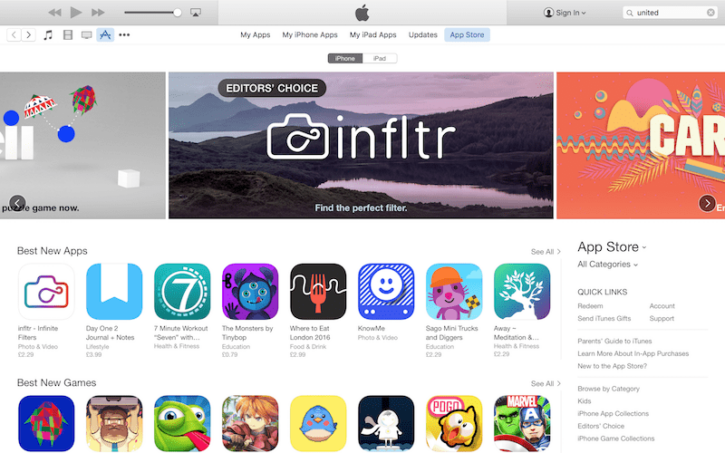 Philippe Levieux is the creator of infiltr, a photo filter app that has been named an Editors’ Choice, Best New App, and Hot this Week in the iTunes App Store, and featured in over 150 countries. Timing is the key to his advice. “Always release your app on a Thursday,” he says, because Features also change on Thursday. Or more precisely, “We always schedule infltr to be released on Wednesday at 11 pm UK time, so if the feature team wants to feature it, it is perfect timing.” He also recommends “to leverage the new technology (both software and hardware) that Apple releases!” For example, “we were the first app allowing you to filter Live Photos back in iOS 9; we were the first allowing you to capture filtered Live Photos in iOS 10; we were the first to fully use the camera in an iMessage App! We are available on iPhone, iPad, iMessage & Apple Watch.” Being first with new features that Apple releases is an almost surefire way to endear your app to Apple’s editors. For infiltr, Levieux says, “we make extensive use of 3D-touch through the app. We have a Today Widget and a Photo/Video & Live Photos Editing Extension… Apple loves these.”

If your app is immediately ready to fill a need, it’s not only going to win customers but could also garner your app some juicy press coverage. Last year, when Microsoft acquired the app Sunrise Meet, it decided to integrate Sunrise’s features into Outlook and sunset the app (no pun intended). ThingThing, an iOS keyboard app, stepped into the void and added its own calendar scheduling feature to woo displaced Sunrise users. The gambit worked, leading the app to be featured in Techcrunch. “This was a big win for us in terms of downloads,” remarked Adam Davis, Thingthing’s CMO. “It really came down to being ready with the right technology – the right story – at the right time.”

Another way to get your app press attention is to localize it. “Categories you can be featured in are different in every country,” Levieux advises. For example, Canada’s App Store has a category for Apps translated into French. “Easy trick!” he says. Infiltr is available in 22 languages and has been featured on several of Apple’s official Twitter accounts, including those for Japan and Spain. “The cool thing when you get tweeted by Apple is that you get a special URL,” he says. “so we have these cool shortcuts which look more professional than the average App Store URL.” www.apple.co/infltr_, which Apple tweeted for example, directs to the Mexican App Store.

George Hartley co-founded the art marketplace Bluethumb. The website grew popular with users, and he had a lengthy customer list at his disposal. When the Bluethumb iPhone app launched in 2013, Hartley used Intercom to segment his customer and artist lists into users who’d visited the site via an iPhone. “We pushed an email to our list on release,” he says, “and added a little header link to the apps on all our transactional and marketing emails. This was the extent of our marketing,” he says. But because the app’s release was so successful, Apple featured it a few weeks after release. Bluethumb is now Australia’s largest art marketplace.

Alex Genadinik of Problemio.com took advantage of guest blogging when it came to milestones. When his app hit 150,000 downloads, for example, his guest blog got picked up by BusinessInsider and Yahoo! News.

Another strategy Genadinik recommends is to subscribe to lists like HelpAReporterOut.com (HARO) and RadioGuestList.com. Both sites connect journalists and content creators with reputable sources for their stories, but RadioGuestList focuses on podcasts and radio shows in particular. When you see a query about a story you can add value to, write in and explain your expertise and give a short description of what your app does. Make sure your pitches are specifically related to the request and personalize your pitch to the news outlet.