Which One Won? Naming an in-game currency 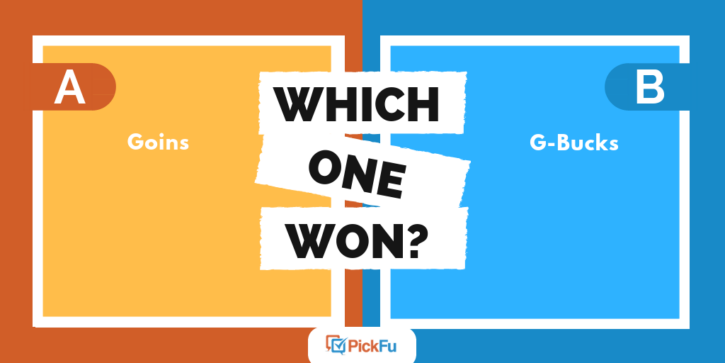 In the mobile app GawkBox, you play mini-games against other creators and create your own community through live chat. The developers behind GawkBox used PickFu to poll 50 mobile gamers to decide on a name for its virtual currency. The team was trying to decide between calling it Goins or G-Bucks.

Between the two names, Option B easily won the poll by taking 80% of the vote. Out of 50 total responses, G-Bucks got 40 votes and Goins got just 10 votes.

Any idea why G-Bucks scored such a big victory? Let’s take a look at some of the feedback from the respondents.

Between the two names, it’s easy to tell that G-Bucks is a game currency thanks to the use of the word bucks. That’s one big reason respondents chose Option B. Several voters left comments such as, “Sounds more like money and easy to remember,” and, “Sounds more like currency.”

G-Bucks also fits the naming convention behind GawkBox and strengthens the overall branding. “I think it’s a little more consistent with the app and the app name – it makes more sense to me,” one respondent commented.

Watch out for unintended innuendos

The biggest reason that G-Bucks won this poll though? While Goins may be a clever play on the word coins, it also sounded too much like an innuendo to most of the respondents.

“Goins sounds too close to groin, and I misread it as such the first time, making it not a good choice for a name of an app’s in-app currency,” a young woman commented.

A young man commented, “When I hear G-Bucks, I immediately think of the Fortnite currency V-Bucks, but when I hear Goins, I think of a nasty medical condition.”

It wasn’t just the younger minds who felt this way about Goins. An older gentleman explained, “G-Bucks for sure. Goins leaves too much room for making fun of and sounds corny.”

These respondent comments show that you have to think about your currency name choices from all kinds of angles. You may have chosen a clever name, but it could be interpreted by your audience differently than you intended.

Run a poll to iterate your mobile app

If you’ve got ideas for your mobile app and aren’t sure which direction to turn, run a PickFu poll. Our software enables you to get feedback quickly. Best of all, you can customize your poll respondents. Solicit advice from 50 or 100 mobile gamers. Ask the opinion of people who spend a lot in the App Store. Or segment your audience by iOS or Android device. For inspiration, see how PickFu helped shape the universe of Super 80s World!