Since the dawn of time, humanity has been asking the big questions: why are we here? What is the meaning of life? If we put the sign-up button in the corner, will users notice it or give up looking?

We can at least answer that last question. Thanks to user testing and usability testing, much of what we had to guess or estimate when developing mobile apps and websites can now be rectified with concrete, empirical data — anything from the controls people use to which colors they want to see.

Basically, user testing is about the user. It answers questions such as: what features do users want? How do they feel when performing tasks? Which image do they like best? We take what we learn from user tests and apply it to make better software, apps, and sites.

Usability testing is less about user preferences and more about functionality and quality assurance, or QA. It answers whether or not a user can accomplish a task, and if they can’t, why not.

Usability tests require a working prototype and typically involve presenting the test user with a scenario to see if they can accomplish it. Mockup testing, for example, uses a mid- or high-fidelity prototype to assess usability before finalizing the visual design so designers can get it right the first time.

As you can see, user testing and usability testing overlap quite a bit. Your prototype won’t score well on a user test without proper usability, and optimizing usability involves knowing user preferences for controls.

In fact, both are considered part of user experience (UX) testing, which aims to improve the all-around experience of using your product, website, app, software, etc.

Why do we do user testing and usability testing?

User testing is the best way to map out and optimize the user journey. To make your customers happy, you have to understand how they think.

User tests are a way to fully understand the preferences, quirks, and motivations of your target users. They’re the perfect complement to your personas. The data from user testing can make those personas more effective.

The reason for usability testing is more straightforward: to identify problematic areas that inhibit usage. As we’ll discuss below, it’s best to test frequently to address problems as early as possible.

When should you do user testing and usability testing?

Short answer: right away! Test prototypes at various stages of development to see if you’re on the right track. The sooner you identify usability problems, the easier they are to fix. If possible, test after each major iteration of your app or site.

User tests can begin even before development. Doing market research through surveys or interviews can help inspire ideas for your team or reveal the best design elements. You might even discover new pain points in your user group that your product can address.

You can begin design testing as early as the wireframing phase. Even with basic graphics, you’ll still get valuable data about information architecture, navigation, and usability preferences.

You should also test after each major upgrade or code change. This type of testing is called regression testing.

What is the most effective way to user test your product?

Usability tests are simple. Present your test-taker with a scenario — for example, have them sign in to their account — and take note of any obstacles, redundancies, or room for improvement. You can focus on specific tasks in specific areas, or present the user with an open-ended task and see how they handle it on their own.

User tests are more varied, depending on your business goals and where you are in product development. Here’s a breakdown of common user testing methods and when you might use them.

Market research techniques such as interviews, surveys, social media listening, and competitive analysis can yield useful data for understanding your customers. This is instrumental early on. If you want to know the opinions, preferences, and pet peeves of your user group, all you have to do is ask.

Focus groups bring together a handful of people from your user group. A moderator leads the conversation and keeps everyone on track. The data comes from what the people say.

Focus groups are most effective early in the planning phase. Responses sometimes yield new and original ideas your team might not have come up with on its own. It’s a perfect way to cast a wide net and involve end users in the design process.

These days, you can conduct focus groups online, circumventing issues with scheduling, reserving a location, or health concerns.

What’s the cheapest way to do user testing?

Organizing user tests on your own gives you the most control, but demands the most effort. Tracking down relevant test-takers who fit the criteria of your user group is hard enough, not to mention other headaches like scheduling conflicts, reserving locations, writing test scripts, and hiring a moderator.

Doing tests on your own may seem like the cheapest approach, but when all is said and done, outsourcing is less of a drain on your resources.

Online user testing tools offer a range of pricing options, depending on the services you require. In general, they’re quite affordable, even for small businesses.

Expertise and time are the two main advantages of outsourcing user testing. Testing platforms such as PickFu understand the nuances of testing and handle the busy work so you don’t have to.

With PickFu’s readymade panel of more than 10,000 respondents, you don’t have to worry about finding users yourself. You can tailor your test audience with a variety of traits, such as iOS users who play mobile games, to hone in on your target customers.

Setup is quick. Input your question with any images or screenshots, choose your target audience, and within minutes, you’ll receive written responses — all this starting at $50 for a 50-person poll.

PickFu respondents are compensated for their effort, so you don’t have to worry about lackluster responses. Even so, the proprietary algorithm automatically rejects low-quality answers.

Learn more about how PickFu can help you optimize the crucial elements of your app, website, software, and more. 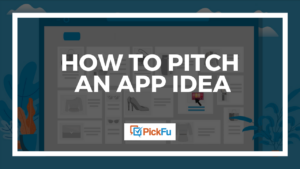 How to pitch an app idea

Apps have become part of the fabric of our lives. We use them to wake up, read the morning news, seek out breakfast recipe ideas, and connect with friends. When …

What’s the right App Store icon size? What should you depict in your icon? What difference will it all make? This guide to app icons will help answer these important … 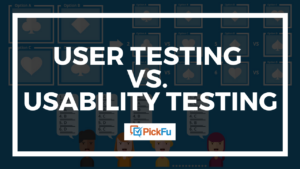 User testing vs. usability testing: Removing the ‘guess’ from guesswork

Since the dawn of time, humanity has been asking the big questions: why are we here? What is the meaning of life? If we put the sign-up button in the …